For his first major US solo show, drag fabulist Dickie Beau conjures the wayward spirits of Marilyn Monroe and Judy Garland. Following the siren call of his childhood idols, Dickie ends up in the New York apartment of an octogenarian journalist, listening to the unpublished tapes of an interview conducted just before Monroe’s death in 1962. Using this encounter as the genesis for Blackouts, Dickie merges reality with illusion and his identity with the actresses’ as he breathes electrifying life into Hollywood’s audio artifacts. The result is an ethereal portrait of icons and a reflection on the lingering impressions they’ve left behind.

Co-presented with Abrons Arts Center
Supported by the British Council. 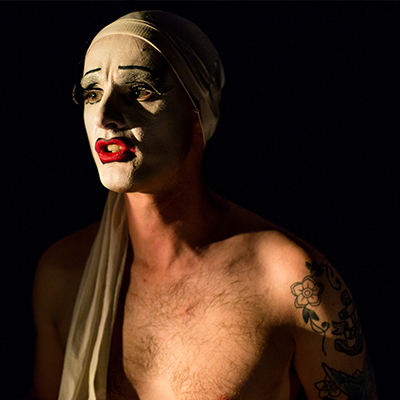 Dickie Beau has revitalized the tradition of lip synching through distinctive playback performances in which he embodies counter-cultural figures and movie stars alike. Miming to speech and interviews, Beau performs uncanny invocations with the showmanship of a drag artist and the melancholy of a clown. At home on the stages of clubs, theaters, and cabarets, he has received awards including the Oxford Samuel Beckett Theatre Trust Award and the London Cabaret Award for Best Alternative Performer.