"Ingvartsen takes an extraordinarily plural approach to the body. When she shifts deftly into the roles she’s describing, now channeling a horny marquis, now a chocolate-covered starlet, the gravity of her transformation is arresting and often genuinely disturbing."
— Springback Magazine
In a striking solo performance, choreographer Mette Ingvartsen mixes physical action with narrative description to consider pornographic acts outside their usual context. The juxtaposition between her movement and words—culled from the Marquis de Sade, pornographic Danish comedy films, and war porn—makes for a visceral performance that evokes not only expressions of cruelty, clinical precision, violence, and pain, but also moments of laughter, excitement, and thrill. 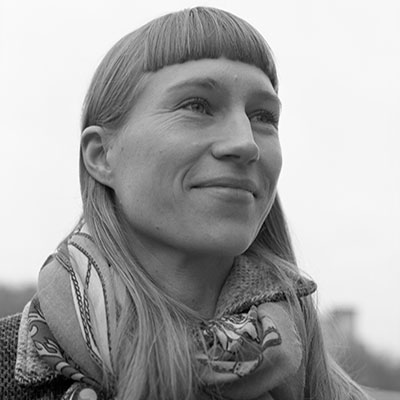 Mette Ingvartsen is a Danish choreographer and dancer to whom questions of kinesthesia, perception, affect, and sensation have been crucial. Starting with evaporated landscapes in 2009, a performance for foam, fog, light, and sound, Ingvartsen began a series of propositions that extended choreography into non-human materials. From 2009 to 2014, she focused on a series of works examining artificial nature. Later in 2014, she started a new cycle titled “The Red Pieces.” This series opened with 69 positions, questioning the borders between private and public space by placing the naked body in the middle of the theater public. In the second piece, 7 Pleasures, a group of twelve performers confronted notions of nudity, body politics, and sexual practice. Ingvartsen, who holds a Ph.D. in choreography from UNIARTS/Lunds University in Sweden, is engaged in research, as in her performative conference Permeable Stage, which comes to Performance Space New York this fall. Ingvartsen also teaches and gives workshops often related to developing methodologies within choreographic practices.