In this poignant, sometimes humorous, and personal meditation on loss, writer and director Mohamed El Khatib reconstructs a written diary of sorts around the death of his mother in February 2012. Combining this autobiographical narrative with fictional elements, El Khatib fabricates a fragile reality constructed through the debris—interviews, emails, texts, documents, and additional sources—of his relationship with his mother. With the audience seated in close proximity to El Khatib, the solo performance takes the shape of an intimate confession or artistic testimony transmuted directly to the viewers.

In French with English supertitles
60 minutes, no intermission, no late seating

A Beautiful Ending is supported by FACE Contemporary Theater, a program developed by FACE Foundation and the Cultural Services of the French Embassy in the United States with support from the Florence Gould Foundation, Institut français-Paris, the French Ministry of Culture and private donors. Additional support for women artists has been provided by Fondation CHANEL. 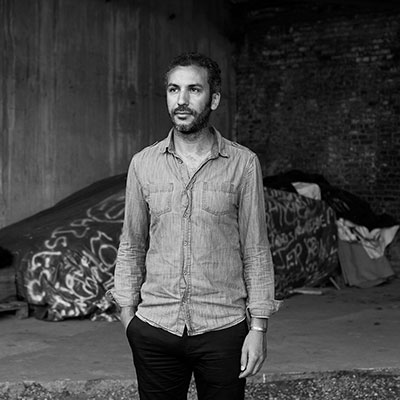 Mohamed El Khatib is an author, director, and performer based in France. His work has garnered success at important arts events such as the Festival d’Avignon. He attempts to confront drama with various media (films, installations, newspapers) and to observe the friction they produce. After studying literature, he attended CADAC (Dramatic Art Center of Mexico), and later received a Ph.D. in sociology focusing on “critique in the French press.” He co-founded in 2008 the arts collective Zirlib on a simple premise: aesthetics aren’t devoid of political intent. He is currently working on “Nowhere to Hide,” a reflection on the notion of grief, which will last for the next 15 years. Since 2011, Mohamed El Khatib has been supported by the L’L in Brussels—where he has been developing research around capturing intimate experiences in writing and attempts to explore, to the point of exhaustion, different modes of anti-spectacular exposition.
Image © Anthony Anciaux - Fonds Porosus