“More than just a reflection on contemporary art: it’s a proud moment for theatre, a play that is as funny as it is philosophical.”
— Time Out
Yasmina Reza’s Tony and Molière Award-winning play, Art, is radically reimagined by innovative Belgian and Dutch theater collectives tg STAN and Dood Paard. This beloved play dramatizes a heated disagreement between three friends after one of them buys an outrageously expensive all-white painting. The play enjoyed a hugely successful run on Broadway in the late 1990s.

This acclaimed, deconstructed production—endorsed by the playwright—sets the work into a riotous play within a play. The actors embody discordant characters while simultaneously breaking from the script to continue their conversation in a metaphysical space.

What ensues is an unforgettable take on the timeless debate on the nature of art.
In French with English supertitles
100 minutes, no intermission, no late seating
Tickets from $20-45

Art is generously supported by the Bank of the West – BNP Paribas Wealth Management.
Additional support provided by the Consulate General of the Netherlands in New York, The General Delegation of the Government of Flanders to the USA , The Netherland-America Foundation, the Performing Arts Fund NL, and by Ronald Guttman. 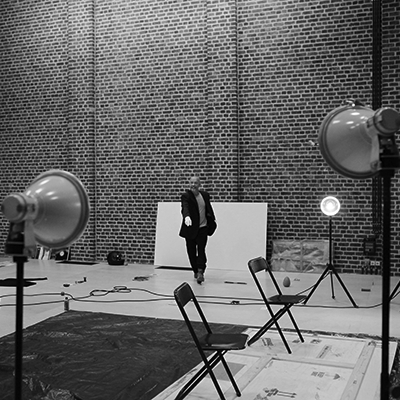 tg STAN
Flemish theater company STAN, an acronym for Stop Thinking About Names, is a collective formed by Jolente De Keersmaeker, Damiaan De Schrijver, and Frank Vercruyssen, who met in the late-1980s at the Antwerp Conservatorium. The company operates on the democratic principle that everyone participates in decisions on everything, from text selection, décor, and lighting to costumes and posters. Besides classics by Chekhov, Gorky, Schnitzler, Ibsen, Bernhard, and Pinter, STAN often presents work of contemporary playwrights such as Yasmina Reza, and is also known for working in a global context, often creating productions with international theatre makers such as Tiago Rodrigues. STAN nurtures a firm belief in the ‘living’ power of theater: the performance is not a reproduction of something that is learned, but is being created anew every night, along with the audience. A STAN performance is therefore not a finished product but rather an invitation to a dialogue.

Dood Paard
Dood Paard was founded in 1993 when its core members, Kuno Bakker and Manja Topper, were about to graduate from the Academy of Dramatic Art in Arnhem (Netherlands). Integral to its philosophy is a commitment to operate as a collective with no single voice of authority. More than two decades later that idea continues to govern company decisions that are still made among its members, which include actors, directors, and technicians. The company regards the world from a critical stance, but one infected with good humor and an optimistic belief that man’s intellect and creativity can transcend tragedy. Past and present works by Dood Paard include Reigen ad lib (Guggenheim Museum), Freetown by Rob de Graaf (La MaMa), Answer Me by Gerardjan Rijnders (La MaMa), Othello by William Shakespeare (La MaMa), and Who’s Afraid of Virginia Woolf? by Edward Albee. Dood Paard performs regularly in the Netherlands and Belgium, as well as in theaters and festivals in Europe, the United States, and Canada.
Image © Sanne Peper